Back to News
Updates
6th October 2015

Compleo Sport, the company behind InYourStride, is now 65% funded on their crowdfunding campaign.

They’ve created some amazing traction in the market, and have overcome some major obstacles in the past 18 months. But being successful in business is all about stamina. And that’s something the InYourStride team have a lot of, according to Robert Clarke from Bath Spa University School of Business and Entrepreneurship, he wrote in an article on LinkedIn:

“They have risen to challenges, overcome mistakes, battled severe financial circumstances and launched themselves fearlessly over massive hurdles. So many startups would have failed in the face of similar circumstances, but these two just keep their heads down and carry on.

Just as Churchill said “When you are going through hell, keep going”.

And going they are. They are doing deals, capturing the attention of major global players, sticking to their principles, and doing the hard yards without so much as a grumble. Don’t get me wrong, they are utterly charming to deal with, and great fun to know – but I assure you underneath is pure kryptonite!” 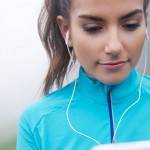